I've been in Whitefield for the last 8 months.  It's where Kate grew up and the area we'd like to have a farm.  We're working at Sheepscot General Farm and Store for our friends Ben and Taryn.

It has been extremely busy; especially this past week with us growing what were reputed to be the only organic strawberries available in the state of Maine.  The weather has been tough for strawberries.  We started off with a bang with hot, hot weather that created some sweet and very flavorful berries.  Then came the rain for a week.  The moisture and lack of sun created moist conditions that encouraged lots of rot in the berries.  They still managed to ripen during the wet spell, but did not taste as sweet or flavorful as they had the week prior. 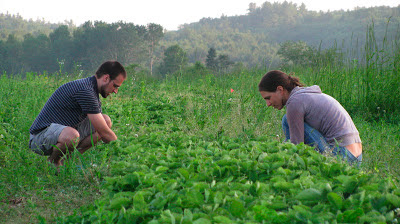 Kate and I also have a second horse named Molly, who came to us from our mentors last year at New Beat Farm.  She is a 22 year old Belgian who has seen and done it all when it comes to farm and woods work.  She has been a good partner for Jess who still seems to be building up his knowledge and confidence when it comes to pulling many different kinds of farm implements.


They are both the same height (which is a nice coincidence), but do not walk the same speed.  With Molly being twice Jess' age, she walks at about 2/3 his normal pace.  The difference in pace makes working them together difficult sometimes because it means Jess is often pulling harder than Molly.  On one hand he can handle the work just fine.  On the other, it isn't the best for him to be doing most of the work as he will tire faster.  We can't complain as Molly is still showing Jess how it's done on a vegetable farm.


Work for the team has been inconsistent to say the least.  The weather is partially to blame as we cannot get them on the ground when it's wet unless we want to risk compaction of the soil.  However, when we can make the time and the weather is OK we still have been driving them around the neighborhood on the forecart, visiting neighbors on the way.

Thursday and Friday, we were able to do some single-horse cultivation with Jess and Molly.  They were in much better shape three weeks ago when we were doing heavy tillage with the two of them.  This week, not so much.  Nonetheless we've seen marked improvements in Jess' ability to work singly with the cultivator.

At first, we harnessed both horses up and drove them up and down the rows to get them warmed up to the task.  Afterwards, I drove him while Kate handled the cultivator on Thursday.  We only worked him for about half an hour with the cultivator (an hour total of driving time), which seemed to be the right amount of time his attention could hold onto the task.  We were able to cultivate around one of the greenhouses, peas, kale, lettuce, and greens.


On Friday after harvest, Ben and I harnessed both horses up again.  This time we intended to cultivate with both of them.  It was a hot breezy day, ideal for cultivating potatoes in wide rows with Jess.  I taught Ben how to harness the horses and had him drive Jess up to the potatoes while I drove up the cultivator in the pickup.  Jess initially didn't want to go down the row, but I was able to drive him down at a nice speed without having to adjust where he was walking very much.  In the past, I had to ask him to slow down a lot as well as deal with him tossing his head around all the time.  He did wonderfully even with an audience of strawberry pickers nearby!

After a water break at the barn, we took Molly out and cultivated a wetter area near the tomato high tunnel.  This (and most fields on the farm) needed weeding badly as the rain and warmth has caused all the plants to explode out of the ground.  There were lots of taller weeds so we needed to go several passes on each of the pathways to knock them down.  Molly walked slow and steady down each of the rows, tiring a lot near the end as the ground was hard from being a wetter, heavier area.


One of the things I noticed was that she was reluctant to turn around back towards the field and away from the barn.  This was one of the things Jess was having issues with before Thursday and Friday.  I began to realize that maybe having the field so close to the barn was distracting the horses from their work because they always want to go back to the barn (food, water, security).  Jess' lack of proximity to the barn when cultivating the potatoes was likely a larger factor in his improved behavior than I thought.  We will test this theory next week when we cultivate the onions and cabbage with him.

The farm has been on autopilot with weeding, harvesting, and planting at this point and this is enough to keep us plenty busy.  Kate and I have continued our farm search and have a very good prospect in mind for next year and perhaps the foreseeable future.  We'll keep you posted! 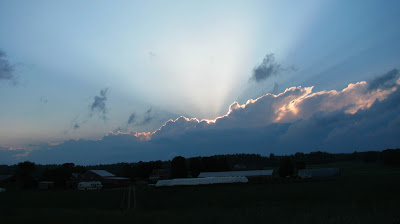