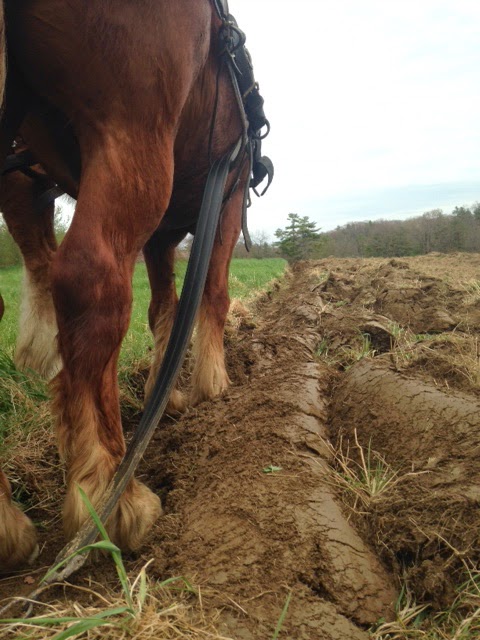 This event took place over the course of the last two days. We just picked up a new Belgian a little over a month ago to phase out our older mare who we got from our mentors. We knew he hadn’t done much work this winter, although neither did our other two horses. His overall health seems good and his demeanor in harness when ground driving and on lighter loads was good. I think he will be a good fit for us.

We had done chores with our young team for a few days a week since we’ve gotten him and even spread some manure. This we did based a bit on what we had heard from Doc Hammill at a workshop at the DAP Field Days last fall and interestingly enough on Kate’s dad’s suggestion while he was helping me get the spreader going. We had them follow the spreader behind my truck; first with nothing engaged, then with the apron on, and then both the beaters and apron on. They didn’t mind the noise. Then we had the truck with the spreader follow the team in the same sequence. No problem.

Looking back, while we were loading, the new horse Tony didn’t like standing with the spreader behind him while we were loading and tried to move many times and I had to back the team back up to the manure pile a few times. I made a note, which went to the back of my head (maybe too far), to remember this later when we put him on new implements and heavy loads. The spreading went fine and after just one late afternoon load, I decided this was a good lesson to end on for both horses.

Today we plowed for the second day in a row. Yesterday almost ended disastrously. Luckily we ended up with nothing more than a bent square tube pole on our sulky plow due to an equipment failure on a wooden neck yoke and a few scrapes on myself after bailing off the plow. We were fortunate to have two of our mentors Mitch and Max over. It was actually Mitch’s neck yoke and evener for plowing that he came over to lend so that the draft on the plow would be set correctly. We tried the same two horses on this plow earlier, but couldn’t get it set right without more experiences eyes and these two know a thing or two about plowing. They didn’t seem antsy or to mind it much at all the first time around so I thought they’d be good with the plow again.

Things were going ok, the plow was slowly starting to scour, and the horses were starting to get it. Our newest horse, the Belgian Tony, took off a little faster than I liked and as I was trying to hold him back I also realized the neck yoke on the off side, in front of Jess, broke and I immediately became concerned about flipping the plow as the horses were no longer responding to my commands. As I felt the plow starting to bounce around I decided to bail and jumped off to the right and not far from where I landed, the pole dropped into the ground and the horses stopped. I was glad they at least didn’t run to the barn.

We reset things after making sure the horses were settled and Mitch suggested we bit Tony down on his Liverpool bit. We then harrowed a small piece to make sure they learned that the incident was nothing more than a blip and that they still needed to work. We were all exhausted and so called it a day. 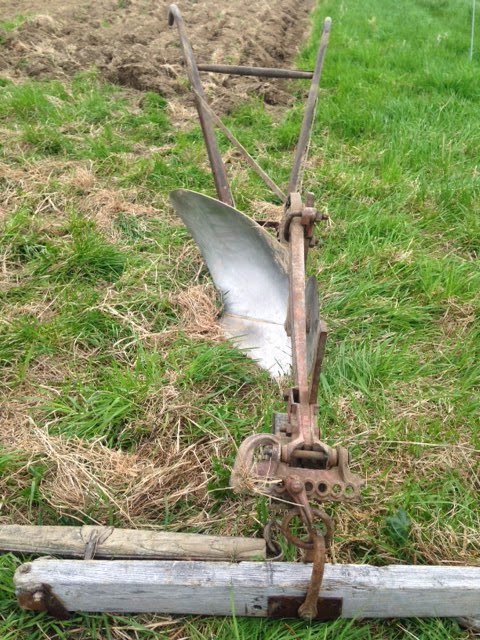 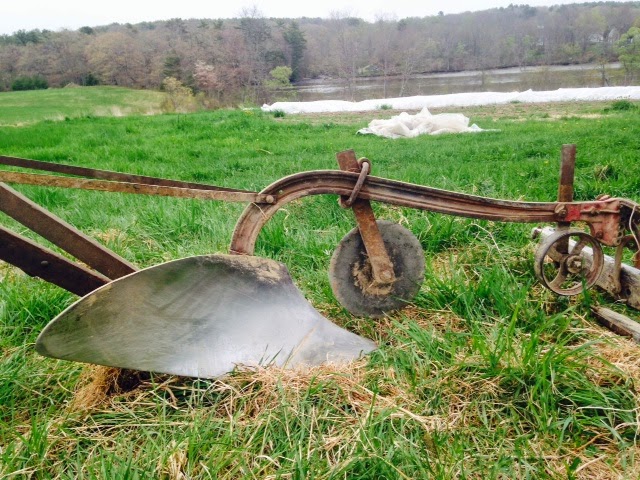 Max came back today and came with his nice Wyard walking plow and we went right back to the same piece to plow. After we were able to scour the moldboard and get the plow set right, the horses settled right into it and boy did that feel good! It was a high and a low in the last 24 hours, but we’re lucky to have great mentors nearby. Kate and I couldn’t help but keep remarking how good we felt during lunch. It’s moments like these that we live for as teamsters.